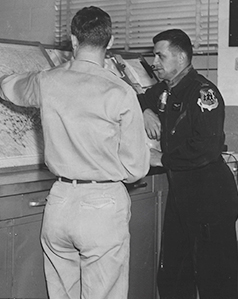 Francis Gary Powers, the central figure in an international clash between the United States and the then-Soviet Union in 1960, when his U2 spy plane was downed on a secret mission, is to be posthumously inducted into the Virginia Aviation Hall of Fame on Nov. 13.

Powers will receive the honor at a dinner and induction ceremony of the Virginia Aeronautical Historical Society to be held at Shannon Airport in Fredericksburg. He will be honored together with Randy Burdette of Stafford County, former chief of the state department of aviation, and retired NASA astronaut Leland Devon Melvin, who played a major role in the Space Shuttle program.

Powers, grew up in Southwest Virginia and learned to fly at Lonesome Pine Airport in Wise County. His life was centered on aviation after she enlisted in the Air Force and started a career flying jet fighters in 1952.

He was recruited by the CIA to fly the U2 spy plane in 1956 and continued those sensitive and dangerous secret assignments until May 1, 1960, when his aircraft was downed by an anti-aircraft missile over Sverdlovsk. Amazingly, Powers managed to survive the harrowing emergency, in the moments following his machine being blown out of the sky, parachuting safely to earth.

That was only the start of what became a major international incident involving the two Cold War adversaries, as Powers was put on trial by the Soviets, convicted and handed a lengthy prison sentence. He served only until Feb. 1962 however, when he was successfully repatriated in an exchange of prisoners for Russian spy Col. Rudolf Abel.

Powers, who continued flying in several capacities for a number of years after his repatriation, died in the crash of a news helicopter he was flying in Encino, CA, in 1977.

Several years after his death, Powers was honored with the National Defense Service Medal, the Prisoner of War Medal, Distinguished Flying Cross and the CIA Director’s Medal for “Extreme Fidelity and Courage.” In addition, the Air Force awarded him the Silver Star for valor during his Soviet incarceration.