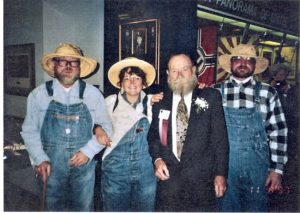 On Sunday, October 17, 2021, Charles A. Kulp, Sr, a.k.a Charlie Kulp the Flying Farmer, went to that big airshow in the sky at the age of 96, after a lifelong love and career with aviation.

You can Google him on the computer to see his public life and aerobatic act. While most folks know his passion for flying and encouraging young people to follow their own passions skyward, few may know the private man, the man away from the show. He loved deeply, often having a difficult time putting it into words, but his actions spoke for him. In spite of his sometimes abrupt manner and gruff exterior, he was a kind and gentle man who loved his children, enjoyed gardening and feeding the deer, birds and squirrels from the many feeders he built and bought. Like his father, he loved to tinker. He once built a motor car out of Cub parts, but failed to put a shut off on it. Afraid he was going to run into a row of planes, he reached back and grabbed the sparkplug with his bare hand. He treasured old friends, spending hours on the phone checking on them and chatting when he sat down for that rare few minutes rest. He was an eloquent speaker. I remember the emotion with which he spoke at my two brothers’ services and his speech at the VAHS induction ceremony (photo above with his children). He had a wonderful, dry wit, which he shared with my mother, Joan. Don’t get me wrong, if he didn’t like you, you knew that, too. As the saying goes, “Still waters run deep”, and he was a complex man.

He is survived by his daughter Joanna B. Kulp, his beloved companion Evelyn Marshall and her family, sisters-in-law, brother-in-law, nieces, nephews, grandchildren and great grandchildren.

A memorial service will be scheduled at a later date in the spring of 2022. In lieu of flowers, the family requests donations to be sent to the Virginia Aeronautical Historical Society (VAHS). VAHS Mailing Address: Shannon Airport KEZF Campus, PO Box 7795, Fredericksburg, VA 22404.