A Look Back at a Legend 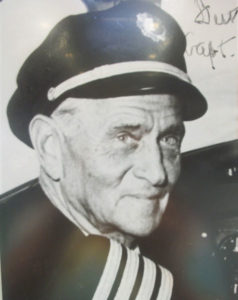 Took down a book the other day and a folded slip of paper fell out. Unfolded, that square of yellow paper took me back to a day at the old Shannon Air Museum in November 1982.

The paper was a program for the memorial service for one of the most unusual and gifted people I have ever known: Capt. Henry T. “Dick” Merrill.

If Sidney Shannon Jr. was the father of this museum, Dick Merrill was its Godfather. Although the two men died within less than two years of one another, they were of two generations.

When the younger Shannon was a kid, his father Sid Sr., a top and founding executive at Eastern Airlines, often brought Capt. Merrill home to visit his young son, Sid Jr., who, like millions of other young American boys of that era, hero-worshipped the famous flyer.

As things worked out in their two lives, when the legendary Capt. Merrill had retired as Eastern’s top pilot and Sid Shannon Jr. had opened Shannon Air Museum in 1976 at the airport bearing his name in Spotsylvania County (just outside Fredericksburg), he saw a win-win opportunity.

The museum needed a curator, and Merrill needed something to fill his retirement days.

It was that coincidence which led me to get to know Dick Merrill, the museum’s first curator. I was a reporter for The Free Lance-Star in Fredericksburg in those years and made it a point to cover aviation wherever I worked.

For the next few years, I would meet with the pioneer, record-setting flyer often, learning a lot about the man behind so many headlines from aviation’s Golden Era. Dick Merrill was not only a witness to aviation’s growing up, he helped it grow up.

These were pre-internet years, but there was plenty of information available about Dick Merrill, and I avidly scoured and read about the world-renowned flyer. A lot of the press write-ups-especially from the 1930s-seemed overblown and exaggerated. Could any one individual have done some of the things attributed to this man?

When I sat him down with a tape recorder one quiet Sunday morning in the museum, the stories poured out from the original source. And, almost always, as one tale followed another, I discovered that this man, whose love of life equaled his passion for flying, could tell a colorful story, but was incapable of deliberate falsification: He couldn’t lie.

His status as an icon was well- deserved. You might say that, as an early aviator he had done it all.

What’s more, he was an intensely social creature, a likeable individual and became an ambassador for commercial aviation.

Moreover, as I got to know not just the pilot, but the man himself, my amazement turned more to the latter than the former. Not that the flying exploits weren’t authentic, the record-setting amazing, the survival tales stunning, but the man behind them may have been even more remarkable.

The stories Merrill told were so numerous and varied that it would take a book to cover them all. That book, I learned, was titled “Wings of Man,” and had been written by Jack King.

Lucky for me, the Captain was a born storyteller and I was a willing listener. I gave him ample opportunity to tell them. Listening now to some of those old sessions when I had been running a tape recorder was reliving the past with the original source.

It must have been a lonely life, flying the night mail. Flying those open-cockpit planes with up to 500 pounds of bank notes and mail for company.

Why at night? That was not a myth. Merrill told me the banks depended on the night mail to carry their days’ receipts, bank notes and other valuable documents between Federal Reserve Banks. Of course! That’s it. The big banks essentially dictated the timing of those night schedules. And Richmond, where Merrill lived, and Atlanta, where he flew to, were both banking centers.

Yet for all the time I spent with the Dick Merrill, it now seems far too fleeting. As with so many others who are now gone, I am left with that overpowering, anxious feeling: If only I had another day, another hour, a few more minutes to ask this or that question!

There’s a lesson here; a hard lesson from an old reporter who still has too many questions to ask: In life as in flying, if there’s something important (to you at least), and there’s someone who almost certainly knows about it, do not put off asking about it.

No matter how long you live: Life is short.