William E. Stucker has passed away

William E. Stucker, gunner on SDB Dauntlesses and SB2C Helldivers, has passed away

Another of our Greatest Generation gone west. One of our fans, Jeff Stucker, shared with us the loss of his grandfather, William E. Stucker in March. William was a rear gunner on SDB Dauntlesses and SB2C Helldivers. He had already been in the Navy a year when Pearl Harbor was attacked. 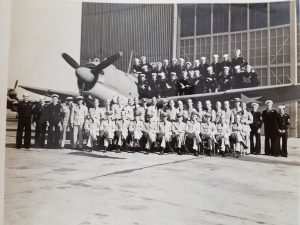 He flew off the USS Ranger (CV-4) before being moved to the Bunker Hill (CV-17) and getting into the Helldiver. After the kamikaze attack on the Bunker Hill, his unit moved to the Hornet. According to his log books (which my uncle has) he flew 1,146.7 hours from June of 1941, until November of 1945 when he was discharged. Bill’s military honors include a Presidential Unit Citation (while assigned to the USS Bunker Hill), TWO Distinguished Flying Crosses, and FOUR Air Medals.

Join us in saluting this honored vet.