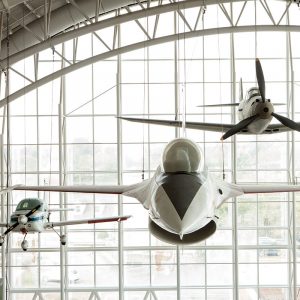 The Virginia Air & Space Science Center features a number of aircraft that highlight more than 100 years of aviation achievements. From a replica of the 1903 Wright Flyer to a full-size DC-9 passenger jet, the Center’s aircraft depict a number of aviation firsts and milestones.

A few of the aircraft you’ll see at The Virginia Air & Space Science Center:

The “Airacobra’s” unique design placed the engine behind the pilot. It used an Allison V-1710-85 12 cylinder, liquid-cooled, in-line engine rated at 1,200 horsepower. The lack of a supercharger left the Airacobra under-powered at higher altitudes, yet it was quite effective in ground attacks. Nearly half of the 10,000 P-39’s built were exported to the Soviet Union where the pilots were intrigued by its toughness and durability.

The F-106 was produced as Mach-2 interceptors from 1956 to 1961 and were used by the U.S. Air Force to protect U.S. air space. Its coke bottle shape, developed at Langley Research Center, marks the revolutionary advancement in aircraft design that attributed to attaining supersonic speed in level flight. From 1980 to 1986, the F-106B on display was used for lightning research by NASA Langley Research Center and purposely flown into thunderstorms, being struck more than 700 times by lightning.

The DC-9 is a twin-engine, single-aisle jet airliner designed specifically to operate from short runways and on short-to-medium range routes so that the speed and comfort of jet transportation could be extended to communities previously served by propeller-driven airlines.

The General Dynamics (now Lockheed Martin) F-16 Fighting Falcon is a single-engine multirole fighter aircraft originally developed by General Dynamics for the United States Air Force (USAF). Designed as an air superiority day fighter, it evolved into a successful all-weather multirole aircraft.The Fighting Falcon is a fighter with numerous innovations including a frameless bubble canopy for better visibility, side-mounted control stick to ease control while maneuvering, a seat reclined 30 degrees to reduce the effect of g-forces on the pilot, and the first use of a relaxed static stability/fly-by-wire flight control system helps to make it a nimble aircraft. Visitors can peer into the cockpit of this popular fighter for a look at modern-day military and the challenges pilots face.

The aircraft was used as a research aircraft by the NASA Langley Research Center from 1968 to 1974. The successful demonstration of the Kestrel led to the development of the “Harrier,” the world’s first operational vertical take-off and landing jet fighter.