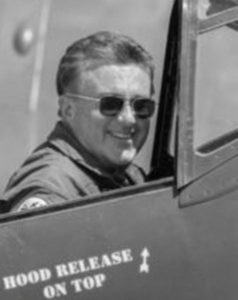 My final duty as a former member of the Capital Region Airport Commission – giving my farewell to a great commission and the best air carrier airport in the country, Richmond International Airport. I was fortunate to serve on the airport commission for 20 years. I had great commissioners, great staff and two great Presidents of the airport to work with. Thank you to everyone who made it possible for me to serve on such a great organization.

Inducted into the Virginia Aviation Hall of Fame in 2015, John “Pappy” Mazza’s aviation experience started from an early age, flying with his father. He obtained his pilot license and instrument rating in a Tri-Pacer. Mr. Mazza always directed energy, time and resources toward making aviation accessible to all communities, often piloting his own plane to provide transportation for the support and promotion of aviation in Virginia.

His service on aviation boards and groups ranged from local general aviation to the Virginia state boards who oversee all aspects of aviation promotion, facilities and service in Virginia. Mr. Mazza was a dedicated and active member of the Virginia Aviation Board, the Dinwiddie Airport and Industrial Authority, the Virginia Transportation Safety Board, Chesterfield County Airport Advisory Board and many others, as well as serving as Chairman of the Capital Region Airport Commission.

Mr. Mazza was a founder and leader of the WWII Victory Capitol Flyover on May 8, 2015 and similar capitol flyovers in earlier years. He was a prime player in obtaining permits to allow the flyovers – an effort which took years to coordinate.

While volunteering as a pilot and Safety Officer of Flight Operations at the Military Aviation Museum, he performed and advocated for aviation across the U.S and also volunteered at local schools to encourage young people to pursue careers in aviation.