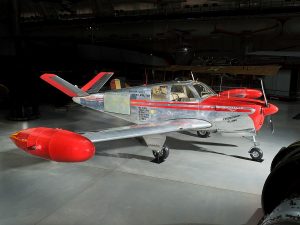 Seventy years ago this month, on October 7, 1951, Congressman Peter Mack left on a solo goodwill flight to 35 countries in a Beechcraft 35 Bonanza called Friendship Flame. The journey, a global dialogue and peace mission, provided a glimpse of a post-WWII world and made international headlines. A few years before Mack’s flight, the same Bonanza, then called Waikiki Beech, was flown by Bill Odom to set two distance records on flights between Hawaii and the continental U.S. Click here to learn more about the aircraft.

The classic Beechcraft Bonanza was introduced in 1947 and is still built today by Textron Aviation. The four-place aircraft sported all-metal construction and retractable landing gear for the sophisticated or executive pilot. Initially designed with the distinctive butterfly or V tail–a conventional tail model was offered too–it was the basis for later Beech aircraft.